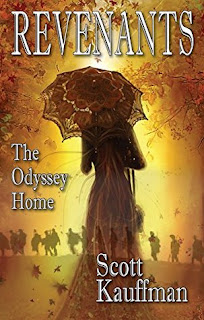 I was offered this book for review and I am so glad I excepted the opportunity and made the time to read it.  From the minute I opened it I was able to connect with Betsy.  She had a brilliant relationship with her brother and then he was taken from her in an instant by war.

She didn't cope!  Instead she went off the rails as she tried to find a new identity without him.  This was written into the novel with brilliance and care.  I felt Scott Kauffman was successful in portraying Betsy's grief without taking it too far.  He managed to keep Betsy real and likable during this faze of her story.

It was when she went to at the hospital that I really entered a new dimension within the novel.  The book geared up a notch and I became transfixed with finding out more and more about the secrets of the secret patient on floor four.  I flicked through the pages wanting Betsy to complete the filing faster or talk more with the patient.  I also wanted to know more about the other patients whom quickly became friends of Betsy and probably every reader this novel.  There are parts in which suggestions are made to some the answers but overall the answers kept sneaking up on me with surprise to each each outcome.

What I really liked was that when the main answers were revealed Scott Kauffman continued to write more into the novel.  He gave Betsy life beyond the mysteries withheld on floor four.  I was able to continue reading about what happened beyond years to each character.  This gave real closure to the novel and I commend Scott Kauffman on his writing.

A grief-stricken candy-striper serving in a VA hospital following her brother’s death in Viet Nam struggles to return home an anonymous veteran of the Great War against the skullduggery of a congressman who not only controls the hospital as part of his small-town fiefdom but knows the name of her veteran. A name if revealed would end his political ambitions and his fifty-year marriage. In its retelling of Odysseus’ journey, Revenants casts a flickering candle upon the charon toll exacted not only from the families of those who fail to return home but of those who do.


This was available from: Book depository, Amazon and Fishpond