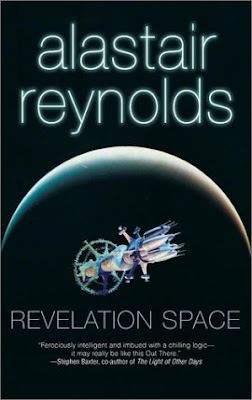 This comes to you with the recommendation of my daughter.  I haven't read this as yet but slowly my house is fulling up with the books from this series.  She was recommended it by one of her friends and since then she has read the first three books, and the fourth arrived this morning.  She has read the first book several times now!  She has spent the week checking the mail and finally today the fourth book arrived... Just in time for the holidays.

Alastair Reynolds's critically acclaimed debut, Revelation Space, has redefined the space operation with a staggering journey across vast gulfs of time and space to confront the very nature of reality itself.

Nine hundred thousand years ago, something annihilated the Amarantin civilisation just as it was on the verge of discovering space flight.  Now one scientist, Dan Sylveste, will stop at nothing to solve the Amarantin riddle before ancient history repeats itself.  With no other resources at his disposal, Sylveste forges a dangerous alliance with the cyborg crew of the starship Nostalgia for Infinity.  But as he closes in on the secret, a killer closes in on him.  Because the Amarantin were destroyed for a reason - and if that reason is uncovered, the universe - and reality itself - could be irrevocably altered...

This was available from: Book depository Amazon and Fishpond