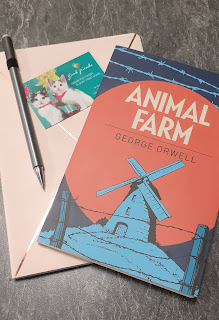 In just 96 pages George Orwell packs a punch not only at political influences of his time but at people and human nature. I am going to give you the historical information taken from the Benet's Readers Encyclopedia first, so that I respect the writing of George Orwell. Then I am going to give you some of the things that made me stop and think.  They aren't political findings - I'm here to encourage you to read and think, not give views religiously or politically.  This made me think more about how we as individuals do similar things to each other.

Orewell, George (Pen name of Eric Arthur Blair, 1903-1950). English Novelist, essayist, and critic. An independent socialist in adult life, Orwell was born in India, where his father was in the civil service. He won a scholarship to Eton but was financially unable to go on to Oxford or Cambridge. Instead he spent five years with the Imperial Police in Burma (1922-27) Much of his early work was at least partly autobiographical. ... After that point, Orwell said that all his writings, both fictional and essays, were directed against totalitarianism in all forms. This commitment is manifested in his two best-known novel, ANIMAL FARM and 1984.   Taken from: "Benet's Reader's Encyclopedia, A Completely Revised and Updated Edition of the Classic Encyclopedia of World Literature. 4th Edition. Harper Collins Publishers. pg762"

Beyond the historical influences.

We start with a little farm.  I thought it reminded me of the movie 'Barnyard'.  The animals held their meetings and had plenty to say about the farmer. It seemed like a normal sort of farm apart from talking animals.

The animals wanted better.  Sounds like most human beings.  A "the grass is always greener on the other side scenario.

Then we start to see the animals as they truly are. They think they are better, well some do and some are just following the crowd. They actually had a point.

We all have a point. Our side of the argument. But is it always right? To the individual, most likely yes.

Let's make everyone believe our side.  After all we can look pretty good on social media.  We can tell our side of anything.  We can look any way we want.

Now back to the animals. They managed to drag down animals that weren't even there; that couldn't have done what was accused. But everyone believed what they wanted to believe.

Now back to us.

Are you getting idea?

We can be as uplifting or as nasty as we like out there.  There are options that were not available in the 1940's, to show what we think and feel about anything. Even things we know nothing about. This story has so many talking points beyond the political. It shows us how one thing leads to the next and how how everything is effecting more than the individual.

Maybe we should all take a minute to little look at our own little world. Maybe even our little 'bubbles' and see just how much we are effecting or influencing each other. Is it for own good or everyone's? Sometimes our intentions are good.  I am sure the animals started off with good intentions. Just ensure that 'power' doesn't over take.... I don't know.... ?

I hope you can see that this is a classic that has been reading material in many class rooms over the past decades. We can still ask questions and they can be more than political. We can ask questions of ourselves and how we do life in the 21 century and how we are treating those closest to us.

Revolution is in the air at Manor Farm after of Major, a prize boar, tells the other animals about his dream of freedom and teaches them to sing 'Beasts of England' Mr Jones, the drunken farmer, is deposed and a committee of pigs takes over the running of the farm. The animals are taught to read and write, but the dream turns sour, the puges begin and those in charge come more and more to resemble their oppressors.

Orwell's allegory of the Soviet revolution remains as lucid and compelling as ever. In beautifully clear prose, he gives us a vivid gallery of characters and a fable that conveys the truth about how we are manipulated through language and the impossibility of finding heaven on earth.