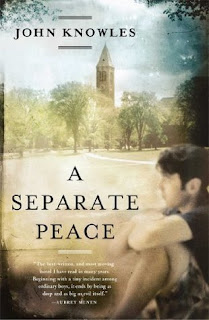 It's been a few months since I posted a review.  It's not that I wasn't reading, it was just that I wasn't writing about them.  I took a break from writing so I could read some of the books that I really wanted to analyse with a different depth.  While doing so I got a whole new appreciation for the written word.  It is quite bizarre really because I spent so many years studying books and text for my studies/qualifications, but to do so for personal reasons is a whole different story.  I highly recommend you put your book down every now and then and think.  Really think about your taking in.

Anyway, to 'A Separate Peace' and what I thought of this piece of literature.

This is another one of those books that I picked up a couple of years ago, read a few pages, and went on to another book that needed reading there and then. I could say maybe I was too busy to read it back then, but in reality I don't think I was ready for it. Not quite in the right zone to appreciate it.  I'm kind of pleased I waited until now to read it, and really read it, getting myself into the plot with the characters as though I there watching from the background.

I got to know both boys and understood each one and their unique prospectives.  There were times in my life where I had such friends and maybe I still do if I choose to analyse each of my friends.  I think we all have such friends and could relate to these two boys.  What made Gene shake the tree?  Was it as cynical as one could envision? Or was he acting on a rapid thought without realising the action was taking place or the consequence?  How would he know such extreme consequence would evolve?  These questions ran through my mind as I read.  I have children and some of the stupid non-thought out reactions they have had throughout their short life time is laughable. Hence, I don't believe Gene saw what was about to evolve.  I really don't.

Then there is the young man that went to war.  He didn't see what was coming either.

What about the boys at the end, that set Gene up so the truth would come out.  Did they think of any consequences?  Did they see what could evolve?

How often do we adults think deeply before reacting.  And how often do the consequences bite back.

Maybe this isn't a story only for young people to read.

Then there were the lies.

Every boy was keeping a lie.  Living a lie of some sort.  Yes, most of these came out in the end as life progressed around them.  But who knew who was talking and living truth and who wasn't.  We all have faith that we can trust our friends.  We have to trust them or what is the point of the friendship.  When that trust is gone the friendship dismantles.  Some are repairable but sometimes going back is too hard.  But sometimes maybe it's harder to live the truth when you really believe the lie?  How do you judge the reasons behind others truth/lies?  How do we even know sometimes?

This book opened up so many questions like these.

Have you read this book and come out with questions?

Do you think Gene expected the outcome of his actions?

Leave me a comment of your thoughts, or answers.... I'd like to know what you found in the pages of this novel.

Set in a boys' boarding school in New England during the early years of World War II.  A Separate Peace is a harrowing and luminous parable of the dark side of adolescence.

Gene is a lonely, introverted intellectual.  Phineas is a handsome, taunting, daredevil athlete.  What happens between the two friends one summer, like the war itself banishes the innocence of these boys and their world.