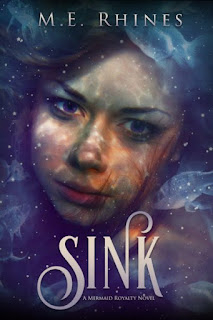 To start with... I love the cover!  To be honest with you it is what made me add it to my TBR list.

Second, I couldn't resist that it's main character was Princess Mermaid Pauline.

And third, it was classed as a 'Clean Teen Read', and I wasn't disappointed at all.

I haven't picked up a book like this one for years.  I have seen lots of changeling books and teen issue books but nothing like this one. I have to say that I am mildly impressed by the ability to write a book that will grab the interest of our innocent teens that don't want to read about the issues they face each day, but rather escape into a novel like this one.  Even though the plot was different from other teen reads that have come my way recently I would like to comment that the plot was far from weak.  I really enjoyed every page.

I enjoyed character in this book.  Normally there is one that will really get on my nerves, but not so in this one.  Even the horrid mother/queen actually had it place and suited it.  She wasn't too over done that I was able to handle her :)  As for the human, Eddie, I really liked him.  He has character in more ways than one.  I liked the best friend and the aunt.  Actually, if I really think about it, I would say that the 'top of the pecking order' sister is the one that did my head in.  I was pleased to see her be put in her place.  I can't say too much I will spoil it all for your young readers.

Now that I have given you a little insight into the first book in this series. there is "Swim' and "Splash' to follow.  I have to admit that I have just added "Swim' to my kindle.  I can't resist a read that takes me from this world into another and still has a bit of innocence to the reading.

Obedience has always been a matter of survival for sixteen-year-old mermaid princess Pauline. Her mother is the tyrannical Queen Calypso, who rules the kingdom of Atargatis with an iron trident. To utter one word against her would mean banishment--or worse--so Pauline bites her tongue and minds her manners. But on the eve of her sister's merling-shower, all of that is about to change. Confronted with the truth about what happens to the human men who are betrothed to the mermaids of Atargatis, Pauline realizes she can stay silent no more.Determined to end the queen's dark tradition, Pauline goes along on a search for shipwreck survivors, secretly planning to free them. But things get complicated when she finds herself inexplicably drawn to one of the men. Before she realizes what's happening, she has kissed him--and a kiss from a mermaid is not without consequences. Now Pauline will have to risk everything if she is to save the young man and thwart the queen's dark plans.
Taken from: Goodreads.com

This was available from: Amazon, and Book depository