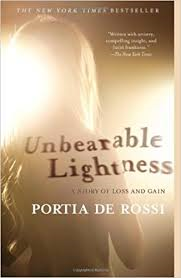 For years I watched the TV programme Ally McBeal and grew to love every character in their own little way, little did I know of the people behind the acting.  Isn't it funny how we like a character and they take it on as the person behind the character as well.

So, flicking through Bolinda Box for an audio book lead me to Portia De Rossi's autobiography.  It started off as any normal celebrity ideal story.  She starts as a model and then progresses to TV.  She diets right from the start.... as one would expect.

But, what progresses through out is the most outstanding truth of bulimia and anorexia that I have ever heard.  Some of the extremes left me gasping for air.  I couldn't believe the extremes she went to without even realising she had a problem.  She still thought she was in control and needed to lose more weight.

I have watched movies of the sort before, but I think this was real and honest.  I admire her for telling her story it can't be easy to put oneself out to the world, especially when your in the lime light for being a 'particular' way.

Well worth reading, but if you have a girl with such an issue I would recommend reading this yourself first and analysing the content.

"Breathtakingly honest, brutal and beautiful."  —  Jonathan Safran Foer
"A cautionary tale, an inspiration, and a triumph."  —  Publishers Weekly
"A stark, well-written portrait of how de Rossi lost control of her life as she became consumed by her struggle for perfection and acceptance."  —  The Washington Post

Portia de Rossi weighed only 82 pounds when she collapsed on the set of the Hollywood film in which she was playing her first leading role. This should have been the culmination of all her years of hard work - first as a child model in Australia, then as a cast member of one of the hottest shows on American television. On the outside she was thin and blonde, glamorous and successful. On the inside, she was literally dying.

In this searing, unflinchingly honest book, Portia de Rossi captures the complex emotional truth of what it is like when food, weight, and body image take priority over every other human impulse or action. Even as she rose to fame as a cast member of the hit television shows Ally McBeal and Arrested Development, Portia alternately starved herself and binged, all the while terrified that the truth of her sexuality would be exposed in the tabloids. With the storytelling skills of a great novelist and the eye for detail of a poet, Portia makes transparent as never before the behaviours and emotions of someone living with an eating disorder.