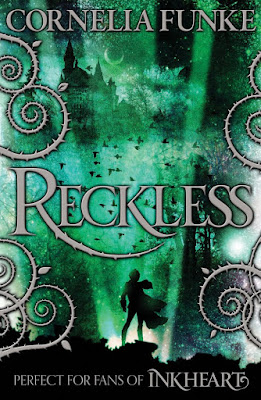 I am a huge fan of Cornellia Funke's writing, so after reading the Inkheart series I quickly purchased Reckless.  This is book 1 in the mirror series and I have been left wanting to read book 2.

This book is easier to read than any of the books in the Inkheart series and a lot smaller.  If you have any children who would like to read Inkheart but are put off by the size of it, then give them Reckless instead.  Reckless had an array of goyls, faires, stone/gem creatures and plenty of action just like Inkheart.  I enjoyed the world just like Inkworld, except this one is inside a mirror rather than a book.  I liked all the characters, but Clara kind of annoyed me (there needs to be one character that does this to you while you read, and Clara was it for me in this book). There was still plenty of action, as in all of Cornellia Funkes writing that I have previously read.  I found this to be just as much of a page turner and I wasn't left disappointed in any way.

What I think most of this book is there are similarities to the Inkworld of Inkheart, but in an easier to read format.  I would be inclined to give this to younger readers before giving them the Inkheart series.  I found the Inkheart series, by book 3, a concentrated read whereas this book I zoomed through.

Jacob Reckless is a treasure hunter in a world behind a mirror, a place of dangereous magic.  There, accompanied by fox, a shape sifting girl, he's lived up to his name.

But disaster strikes when his younger brother follows him through the glass.  Unless Jacob can save him, his brother will tun to stone...

This was available from: Amazon, Book depository and Fishpond