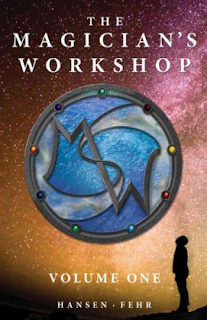 I was given this book and have finally had the chance to enter the world within the pages.  I particularly enjoyed the magical creations and reality behind them.  It was within the first few pages that we are given a taste of these magical talents.  I thought it was what gave the book life.

This book will be enjoyed by many young readers.  When I first started reading I thought it could have gravitated towards a similarity of Harry Potter, but I was wrong.  This book is unique.  I don't think I have read anything that I could say has a similar storyline even though I have read many fantasy novels.

What I did find was there are numerous characters to keep up with.  I had to keep reading to find out what happened to each.  There were a few times that I wondered what had happened to a character as the author introduced a new group of characters.  By the end the book I had the characters under control and was left needing to read the next novel.  This is a series, and one of which you do need to keep reading to find out the end of the story.  The plot, which the series is gravitating towards, is not answered within this first book but it will be what will make this a successful series.

Everyone in the islands of O’Ceea has a magical ability: whatever they imagine can be brought into existence. Whoever becomes a master over these powers is granted the title of magician and is given fame, power, riches, and glory. This volume of books follows the journey of a group of kids as they strive to rise to the top and become members of the Magician’s Workshop.

Layauna desperately wants to create beautiful things with her magical powers, but all she can seem to do is make horrible, savage monsters. For years she has tried to hide her creations, but when her power is at last discovered by a great magician, she realises that what she’s tried to hide might actually be of tremendous value.

Kai just wants to use his powers to have fun and play with his friends. Unfortunately, nearly everyone on his island sees him as a bad influence, so he’s forced to meet them in secret. When one of the creatures they create gets out of control and starts flinging fireballs at their town, Kai is tempted to believe that he is as nefarious as people say. However, his prospects change when two mysterious visitors arrive, praising his ability and making extraordinary promises about his future.

Follow the adventures of Kai, Layauna, and a boatload of other characters as they struggle to grow up well in this fantastical world.

This was available from Amazon