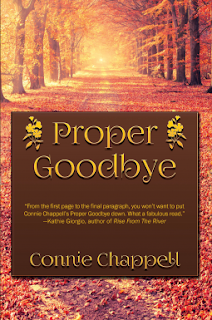 This is the second book I have read by this author and I have enjoyed them both.

What I enjoyed the most about this book was the realism.  The characters and plot were realistic and I found myself sensing the emotions as I travelled through the pages.  As Bebee lost her position in the church and went though her own religious trials, I could feel her grief and the questioning of her choice of employment in the first instance.  Then she found out about the loss of her mother, whom had many issues and had made lots of bad choices which had effected Bebee, I quikcly became drawn to Bebee's character.  She wanted to fix her father, but had things to fix within herself and the writing of this novel portrayed all this in such a way that it was real and more than a plot line.

Cliff, Bebee's father, was a brilliant peice of artistry in Connie Chappell's writing.  Every emotion he had seem raw.  Although he hid behind the past, trapped in the past, he was angry yet gentle all ta the same time.  He seemed to deal with the loss of his wife, and the past, as any man would.

The other characters seemed to drift in and out of the story, all fitting in to bring the plot to a closure as questions were answered and things brought together in final chapters.  There were twists that kept me turning the pages, even at times becoming tempted to skip read to find where the story was leading me.

I like Connie Chappell's writing.  She writes with realism and innocence both of which draws me to her novels and the characters within.

Beebe Walker’s life changes when she learns about a secret buried in her father’s cemetery. The secret revolves around the burial of a homeless woman and, eventually, draws her home to Larkspur, Michigan, to renew a relationship with her father, Cliff.
Months earlier, Cliff stood back from that sparsely attended funeral, unaware the woman’s passing made him a widower. Cliff, devoted caretaker of the cemetery, doesn’t know he’s tending to his wife’s grave. Beebe must find a way to tell her father that the homeless woman was misidentified. In reality, she was the wife and mother who abandoned them decades before.
Oddly enough, the first person Beebe meets upon her return is a young man who’s new in town. Yates Strand is also chasing the secret behind the homeless woman. He has another story to tell.


This was available from: Book depository, Fishpond and Amazon