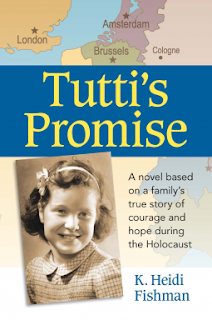 Tutti's Promise is an amazing story of a young girl and her family as they fight to survive the Holocaust.  It is written from the point of view of the child.  This is what captured me.  I have read many books on the Holocaust survival and they have all be brilliant bringing out stories of strength, endurance and survival beyond human belief.  I found Tutti's Promise to be all this, and more, as a child's account of her parent's courage and strength unveiled.

Amongst all the trials, Tutti's father is able to buy her a doll of which he places all the money they have into the head chamber.  Tutti is then given the doll for her birthday.  Along with the doll comes the promise and challenge of never letting the doll from her protection, no matter what the circumstance.  I was touched by this.  As lists are placed on walls with the names of prisoners destined for the gas chambers, the last thing one would want would be their child screaming over a doll.  But, this was the family's future survival source.  As a mother I thought of what I would have my children do.  One then quickly realises the hope of the father and mother, and the strength of a daughter no matter how young.

The father amazed me in this novel.  He never gave up trying every resource available to him as he endeavoured to keep his family in the right places.  He managed to just scrape through many events. The family also struggled to keep extended family together, but never stopped in the effort to bring each family member back together.  It was a story that showed unbelievable family strength and connection.

For any middle grader, this book is a brilliant piece of history that will far exceed many history texts in the education of Holocaust survival.  The writing from a childs perspective, gives strength to the story.  The photos at the end show the family, Tutti, and her doll, all bring a sense of life to the book.  I would like to see this book used as a piece of educational history by teachers presenting the topic which remains a bit of history that continues to be told and shock every generation.  This is a piece of history that needs to be learnt from so it never surfaces again, to any degree, in the future.


A promise kept is like the twinkling stars in the night sky . . . a constant reminder of something important that makes you who you are.
Can nine-year-old Tutti keep a promise—and a secret? Her family’s life may depend on it.
In the early 1930s, life for the Jews is on the brink of ruin: Hitler has come to power, and the golden memories of happy times are fading fast.
One young couple, Margret and Heinz Lichtenstern, decide to flee Germany with their parents and daughter, Tutti. They move to Amsterdam, where Heinz is able to continue his work . . . and where there seems to be hope for the future. Two years later, Tutti’s brother is born, and the family is prospering.
But then Germany invades the Netherlands. And in the pre-dawn hours of May 10, 1940, the Lichtensterns suddenly learn that they have not moved far enough.
This is the true story of what the Lichtensterns endured under the Nazis. Told by Tutti’s daughter, Heidi, and filled with historical documents and photos, it vividly recreates how one family conquered fear and heartbreak to survive. Theirs is a tale of both unimaginable devastation and lucky surprises—raids, sabotage, helpful friends and strangers, and a very special gift. ​
One family. One remarkable story. And in the end . . . a promise kept.