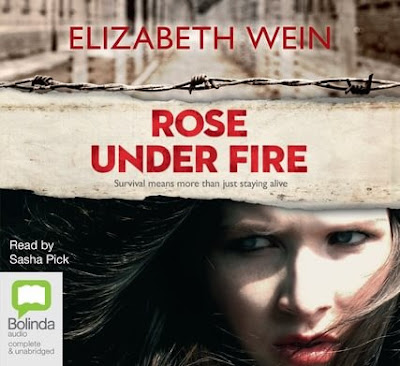 This took an extremely long time to listen to, 11 hours, 37 minutes to be exact.  I listened in disbelieve as I became engulfed with the lives of these characters.  Rose Justice is believed to have crashed her plane in part one.  I found part one pretty normal in the way of novels.  Part two on the other hand transported me to Ravensbruck, a Nazi women's concentration camp.  There, I practically lived with the women as I listened to their stories.  Even though I have read many books of Jewish survival, this one is different.  Rose Under Fire managed to take me inside the camp, into the lives of these women.  I had never hear of the 'Rabbits'.  I hadn't realised such experimentation that went on.  I was shocked to even think it all possible.  As I write this, I re-envision the story and pause to think about the lives of the millions of prisoners, and sit almost speechless.

As the book evolves, the war ends and the women are left to survive out in the world.  They have to tell the world what happened.  They had promised to 'tell the world'.  This proves harder than they thought.  Each get their day court but struggle to show the scars.  They struggle to even get on the stand.  I felt for these women all the way through the book.  They made friendships deeper than any I have ever known.  They had nothing left to hide as they were stripped of every dignity in the presence of each other.  They cradled each other through the experience.

This is fictional but extremely historical as explained at the end of the book.  I think it is one excellent piece of literature that will grace shelves around the world for many years to come.

Rose Justice is a young pilot with the Air Transport Auxiliary during the Second World War. On her way back from a semi-secret flight in the waning days of the war, Rose is captured by the Germans and ends up in Ravensbrück, the notorious Nazi women's concentration camp. There, she meets an unforgettable group of women, including a once glamorous and celebrated French detective novelist whose Jewish husband and three young sons have been killed; a resilient young girl who was a human guinea pig for Nazi doctors trying to learn how to treat German war wounds; and a Nachthexen, or Night Witch, a female fighter pilot and military ace for the Soviet air force. These damaged women must bond together to help each other survive.

In this companion volume to the critically acclaimed novel Code Name Verity, Elizabeth Wein continues to explore themes of friendship and loyalty, right and wrong, and unwavering bravery in the face of indescribable evil.

This was available from: Book depository, and fishpond