The A to Z of you and me 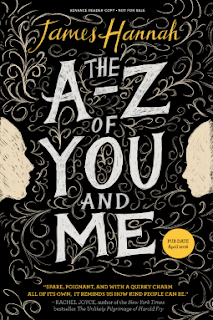 There were a few things I liked about this book...

First, I liked the protagonist had diabetes rather than cancer, car accident or mind issues, which most books tend to feature.  We live in a time where the westernized world has vast amounts of diabetics.  Yet, cancer tends to be the main talking point.  I have known a few people now that have died with cancer, and I hate the disease.  Even though I have seen many cured, I know the damage it does to one's mind and body as it slowly eats the person away.  So, to read a book highlighting diabetes and learning a little more about a sickness that faces so many people, I found journeying through the book with this character enlightening.  I hope I can say I am a better person with a little more respect and understanding of diabetes, from reading this novel.

Second,  I enjoyed the nurse, Sheila.  I would be friends with Sheila.  She had a way of opening people up, caring, supporting, nurturing; while still being tough and professional.  I hope that if I ever need a nurse, I get one just like Sheila.

Third, I liked the way it this novel told two stories.  There was the hospital and his sickness that was far from weakly told.  Then there was the drama of his past life as he played the A-Z game.  This was an interesting concept; it was like reading two novels in one.

Finally, but not least, I enjoyed the journey from wonder, to laughing, to boarder-lining crying; the suspense, the want to skip a couple of pages to see what the happened (but I didn't) and the ending.  You have to read to the end!

Yes, I recommend this book, and I thank Netgalley for enabling me to read and review this book.   I will respect the food I put into my body more so than ever after reading this book, as I have been friends with characters that have shown me the world of diabetes in a very clever, enticing novel.

Already released in the UK, James Hannah’s debut novel has received much literary acclaim, as well as inclusion in the Guardian’s Not the Booker Longlist.
“This terrific first novel… is absolutely bloody heartrending… Hannah’s eccentric style is never mawkish and often wonderfully funny”—The Times (UK)
“An affecting debut… Hannah proves himself a worthy inheritor of the lip-trembling English tradition… Hannah’s debut is an excellent example of that genre of sophisticated and sentimental fiction in which the terrible perplexities of life are teased into pleasing fictional shape.”—The Guardian
“There’s an elegance to Hannah’s prose, and compassion in the way he handles his subject matter that’s rare to find in a debut.”—The Independent
“Spare, poignant, and with a quirky charm all of its own, it reminds us how kind people can be.”—Rachel Joyce, New York Times bestselling author of The Unlikely Pilgrimage of Harold Fry
A striking literary debut of love and mortality, The A to Z of You and Me is is the story of a man who doesn’t have much time, his love for a girl who isn’t there, and the game he plays while waiting that illuminates the devastating and beautiful turns of life. The A-Z game. For Ivo, it’s a way to pass the time, a way to avoid the pain, and a way to think about what really got him here. His hospice nurse suggested it – think of a body part for each letter, and think of memories connected to each one. And so begins the revealing of his misspent life: the terrible teenage choices, friendships made and cracked, love he’ll never get back. He remembers the girl who tried to help him, the friend who wouldn’t let her, and the sickness that chases him even now.


This was available from:  Fishpond, Amazon and Book depository