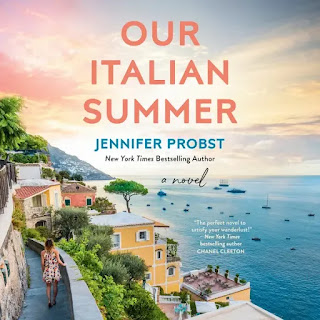 I have much respect for the women in this novel. When you embark on a journey through these pages you will encounter three women.  All on the same journey, yet all on a different journey of discovery too.

Let's start with Sophia.  A woman who has lived a life.  It wasn't always the life she wanted but learned to adapt and enjoy what life was giving her.  There was one thing that she hadn't done and that was travel. Like many of us, she put her life on hold for those she cared about.  That is until now.  But then again, her decision to travel is based around her daughter and grand-daughter. It is her choice, but once again is it for her family or for herself.  Discovery....

Now to Franchesca. The typical career-obsessed mother/woman. But why? And will she break the habits of a lifetime? What really lies behind the need to control every aspect of her life? She wants Italy to bring Allegra to her senses, but is it Allegra that needs to be bought to her senses? Is it Allegra that has life decisions to be made? Discovery...

And, Allegra.  I thought the novel put Allegra in a box of a stereo-typical teen.  I was quite disappointed by Allegra's character. I thought there was so much more to Allegra than the stereo typical teen. Then there is the young man that she falls in love with.  He has a different path that he is seeking and I became disappointed with the stereo-typical outcome of their relationship. I would have liked to have seen them play out in a different way, but I still really enjoyed the book.  Did she find her way? Discovery...

As you may be able to tell, I enjoyed this novel except for some aspects of Allegra's character plot. I was impressed by descriptive writing which at times I felt was almost poetical. The words tantalized my mind, playing games with their sounds. It drew me into the book as I was enabled to 'see' the world in the pages due to the writing.  I enjoyed the experience of reading this book.  Jennifer Probst has a good future ahead of her, I would just like to see more uniqueness in some of the characters rather than what the world expects. Why? Because I have met some great teens and I felt Allegra had more to her!

Workaholic, career-obsessed Francesca is fiercely independent and successful in all areas of her life except one: family. She struggles to make time for her relationship with her teenage daughter, Allegra, and the two have become practically strangers to each other. When Allegra hangs out with a new crowd and is arrested for drug possession, Francesca gives in to her mother's wish that they take one epic summer vacation to trace their family roots in Italy. She just never expected to face a choice that might change the course of her life.

Allegra wants to make her grandmother happy, but she hates the idea of forced time with her mother and vows to fight every step of the ridiculous tour, until a young man on verge of priesthood begins to show her the power of acceptance, healing, and the heartbreaking complications of love.

Sophia knows her girls are in trouble. A summer filled with the possibility for change is what they all desperately need. Among the ruins of ancient Rome, the small churches of Assisi, and the rolling hills of Tuscany, Sophia hopes to show her girls that the bonds of family are everything, and to remind them that they can always lean on one another, before it's too late.