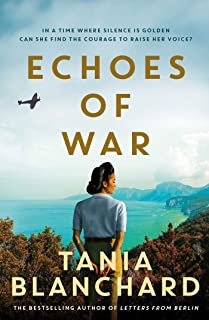 Hi Everyone
Within the first few pages, I was walking along side Giulia Tallariti as read every page with expectation.  She was strong character with a strength and determination that surpassed the expectancies of women in her era.  She was meant to submit to her father, then be handed over to marriage to do the same with her husband.  This may seem like a rigid thing in the world we live now, but it was a normality in 1935.  We cannot judge what was normal in the 30's with what is normal today, there will be many things from or 'normal' that will be judged in 90 years as wrong too.  In the first chapters Giulia's father made me so angry, but when he's examined with the rest of the story, I see he was playing his part, not only as a character but as a historical figure.
Once I got past the expectations of historical literature and the characters, I journey along side Giulia as she determined to live her destiny. I know this book is fictional but there were many times that I put the book down and thought about the lives we live today, in comparison to Guilia and her family...
Physically the same world that I live in, but the dynamics are extremely different today.  In some ways we have travelled very little and in other ways we have travels in extremities!  I couldn't help but be placed in Guilia's shoes as I became so absorbed into the book.  She was strong and determined and in many ways I am too, but when I look at the road she travelled I realise the difference. Her hurdles were caused by the people around her, mine are often self-inflicted hurdles.  The world offers women way more opportunities than they did in 1935 but do we always take them?  Guilia was could have portrayed as a victim yet she walked every day fighting for what she believed and endeavoured to help as many people as she could. She didn't live in a victim mentality, rather she lived her 'best life' all the way. This is where I found her character's greatest strength.  I know I was probably meant to see the world around Guilia, but I found myself seeing the quiet battles inside her the strength in which she took on the world with grace and dignity.
Guilia wasn't the only character that surprised me.  Her first husband was a gentleman and I appreciated him being written into as such a character.  I liked that after seeing her father, I could transition to seeing the men in the story were going to be given conflicting characteristics.  You have to read it to see all the different characters and what they bring to the story.  They all have their unique part to play in telling and showing of what this time in history was like, not just people like Guilia but also people like her father, mother, sisters, brothers, all the men and all the women.  They all played their part in bring this piece of historical literature together.
Brilliantly writing piece of writing.  Thank you Simon and Schuster, along with Netgalley, for giving me a copy to read.
Description:
Set in Mussolini’s Italy amid great upheaval, this is the story of one woman’s determination to find her place in a world that men are threatening to tear apart. Another heart-rending novel inspired by a true story from Australia's bestselling author of The Girl from Munich.Calabria, Italy, 1936In a remote farming village nestled in the mountains that descend into the sparkling Ionian Sea, young and spirited Giulia Tallariti longs for something more. While she loves her home and her lively family, she would much rather follow in her nonna’s footsteps and pursue her dream of becoming a healer.But as Mussolini’s focus shifts to the war in Europe, civil unrest looms. Whispers of war are at every corner and her beloved village, once safe from the fascist agenda of the North, is now in very real danger.Caught between her desire to forge her own path and her duty to her family, Giulia must draw on the passion in her heart and the strength of her conviction.Can she find a way to fulfill her dreams or will the echoes of war drown out her voice?
Happy reading