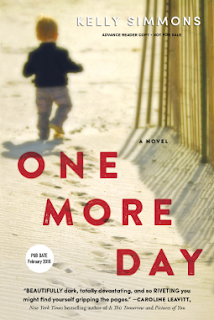 When I first got this book, I was so excited by the blurb.  I couldn't help but open it quickly and start reading.  I have to say that it was nothing like what I expected.  I was thinking of a storyline where a child is taken, returned, and taken again.  While that is the base of the story, it is far from what the story develops into.

I am impressed by this story.  The depth in which the story developed had me up last night reading at 2 am.  'One more day' becomes 'one more day' all throughout the book as more characters are introduced.  Has that got you intrigued?  It is what kept me reading.  As more secrets opened up through 'one more day' events, I had to keep reading to see what was real and what was not.

I had no idea what the outcome was going to be until the end.  I like books that keep me reading until the end to find out what I need to know.  I liked the stress of the story and characters.  It had me turning page after page to find out where each secret was heading.  Everyone seemed to have a secret and they were being exposed in the bizzare ways.  As secrets are revelled and told the mystery of the missing child evolves, but you have to keep reading to discover where it all leads.

This is a very well written book, in my view.  It is different from anything I have read and that's what I enjoyed the most.  An unpredictable plot which takes you into many lives as secrets evolve making the main character, Carrie, seem unstable yet so real.

No one wants to be the mother whose child disappears. It's unthinkable, the stuff of nightmares. But when she turns her back to pay a parking meter, Carrie Morgan becomes that mother. Ben is gone, and more than a year later, it's clear that he is never coming back.

Until he does...for just twenty-four hours, before once again vanishing from his crib without a trace. Rumors start to circulate through Carrie's small town. Whispers that she's seeing things. That her alibi doesn't quite add up.


This was available from:  Book depository, Fishpond and Amazon