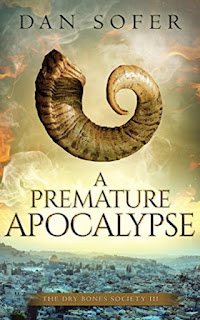 Here we have it the final instalment of the Dry Bones Society, you can check out my reviews of the first two An Unexpected Afterlife and An Accidental Messiah

I read the first two books in this trilogy and quickly fell in love this series.  Both books grabbed my attention as I became obsessed with the characters.  So when A Premature Apocalyspe  found its way onto my Kindle I once again entered the pages to see what had become of these characters.

Elijah has been my favourite character thoughout this series.  I don't exactly know why he grabbed my attention as most of the plot didn't centre around him.  But, this perhaps that is why I had to keep reading.  If I wanted to know what he was up to I had to keep reading in search.  I was pleased with his final outcome in this novel.  He was kept as the Elijah I expected which is something I really like in a novel.  I don't always want a twisted outcome in a character, so in this case I wasn't dissappointed.

As I opened this book I found the politcal content a little distracting but only because I'm not a majorly politically influenced person.  But, I had to keep reading because I knew Dan Sofer wouln't dissapoint me in any way.  And right on!  By the end of the first quater I was turning the pages a quick as I could.  By half way I was totally taken by the thrill of the the plot.  This book has plenty of historical content entwined with biblical wonder as we journey into the world's end days with these characters.  It really got me thinking about a lot of things the movies have neglected to think about.  Im impressed!  I have to say I am totally impress with this series it has been well thought out and developed.  I recommend it to all.


The final novel in the award-winning Dry Bones Society trilogy.
WORLD WAR III IS THE LEAST OF HIS PROBLEMS…
Everyone knows Moshe Karlin is the Messiah. Except for Moshe Karlin.
As he wields his newfound political power to fix Israeli society, natural disasters—and some very unnatural disasters—devastate the Holy Land and turn his plans to dust.
World War III inches nearer and the planet’s fate dangles by a thread. With time running out until the End of History, Moshe must overcome unimaginable obstacles and diabolic opponents to fulfill his destiny… and uncover the shocking truth of the long-awaited Redemption!
Elsewhere in Jerusalem, a lovesick suicide bomber gets a lucky break, a reformed criminal makes a devastating decision, and a broken prophet defies death one last time.

This was available from: Amazon andBook depository