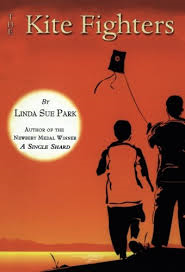 This is a lovely little book.  It is part of the Sonlight Curriculum which I purchased for my children a couple of years ago.  I am now working my was across the book shelves taking a look at what I had them read.

This one is not a hard read.  It isn't even a really exciting read.  But it is a great read with plenty of talking and teaching material. It shows loads of the Korean culture which I found fascinating.  I like that the Sonlight Curriculum is broad in culture and character.  Many books dominating our bookcase are westernised culture, so when I see my children reading a broad range of cultural books it makes me a happy lady.

I like the characters.  The boys had respect for their father and culture even though the second brother resented the older brother.  This resentment was shown rather than hidden, but the culture was still respected.  The older brother showed compassion and respect for his sibling while still presenting his request to his father.  It was the father that had the most difficulty seeing change.  I actually felt for the father in many different ways as I came to understand the depth of cultural respect and influence.

I loved the little king!

Overall I enjoyed reading this.  I read it quickly and bought up many of the issues as talking points with my young ones.  They weren't reading it with me but they listened to the things that I found worthy of discussing as I read.

It's like the kite is part of him -
The part that wants to fly.

As the second son, Young-sup knows his duty: to assist his older brother, Kee-sup.  Whatever they do, Kee-sup represents the family.  He gets the privileges and responsibilities.  Young-sup gets to help.  That's the way it's always been.

With the New Year Festival coming up, the boys set their sights on the kite fights.  Given their combined talents, they could win.  But tradition, through the stern voice of their father, says Kee-sup must fly the kite.  If he does, they'll surely lose.

Kite fighting means so much to both boys, especially Young-sup, who sees a chance to prove himself.  But how do you stand up against what's always been?

This was available from: Amazon, Fishpond and book depository