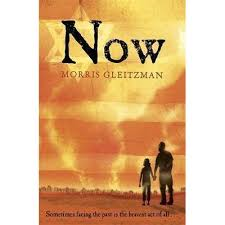 Hi Everyone,
Now is the third book in the Once, Then, and Now series, which I have been reviewing over the past week.  This one is a little different from the first two books, but I still enjoyed it just as much.

Felix is now grown up and a grandfather to the next Zelda.  He doesn't like her being named after his friend from the previous books, so he calls her Margaret after his favourite book character.  Felix still talks of his past amongst the chapters of this book, but the main character (for me) was Zelda.  It is told from the perspective of Zelda and the story revolved round her more than Felix.  I like connection between the old and the new, and the way in which the author portrayed the two.

The first part of this story touches on bullying.  This was very well managed and I think a lot of young people would enjoy Now due to this content.

The second part of this story touches on the Australian bush fires.  This was excellently told.  I cannot think of a better writing of these events for our young people to read.  Absolutely fantastic writing!  I was absorbed into the plot and characters.

Still, as like the previous books I really think these books would make good read alouds.  From Once to Now the content makes good talking points with our children.  The characters are believeable and the plot well structured.... but the content is worthy of discussion.

Now is the third shocking, funny and heartbreaking book in Morris Gleitzman's Second World War series. Sometimes facing the past is the bravest act of all...ONCE I didn't know about my grandfather Felix's scary childhood. THEN I found out what the Nazis did to his best friend Zelda. NOW I understand why Felix does the things he does. At least he's got me. My name is Zelda too. This is our story.

This was available from: Fishpond, Bood depository and Amazon

Email ThisBlogThis!Share to TwitterShare to FacebookShare to Pinterest
Labels: Childrens