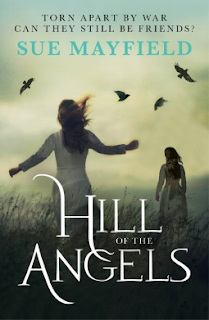 Hill of Angels is different from what I envisioned, yet I enjoyed it to the very end.  It is told in first person but from from two perspectives, that of Abigail Booth and Grace Fowler.  Each chapter switches between the two girls as they tell their story.  I found this a little confusing for the first few chapters but soon became engulfed in the two perspectives.  What starts as an innocent friendship soon becomes stories of survival as the friends are torn apart by the beliefs of their family members.  It was the two perspectives that gave life to the story.  It is easy to focus on one perspective and believe it to be utterly truth.  That is, until one hears the other side of the same argument.  This is what I found most interesting in this novel.

To read of a civil war, written of friends yet from different perspectives, gave me an understanding of the impact war has on friendships and families.  Amongst these perspectives was a historical writing of a civil war, which is highlighted in the documentation following the story.  The writing of this novel has been cleverly presented in a manner that takes the reader deep into each character and family, while writing of historical events.

I give this author credit for the brilliance of her writing.  The perspective analysis of each character; the family bonds; the friendship that although torn is never forgotten; and the historical elements, all make this a great read.


‘Meet me at the Hill of the Angels,’ I said suddenly but Grace shook her head. ‘There are no angels,’ she said coldly . . . ‘And in this new world you and I cannot be friends.’

1640. In the Pennine wool town of Middleholme, childhood friends Abigail Booth and Grace Fowler are united by a shared love of wild hills, beautiful things and the mysterious angels of their secret place.

But tension is rising and bitter lines are being drawn across the land. Who is for the King? Who is for Parliament? And which side will God favour?

When the Civil War erupts, violently dividing neighbour against neighbour and brother against brother, Grace and Abigail’s families are ripped apart. Will their friendship survive and their hiding place remain safe?

An enthralling story about loyalty, war and the redemptive power of love.

This was available from: Amazon, Fishpond, and Book depository
Posted by Richelle at 15:51