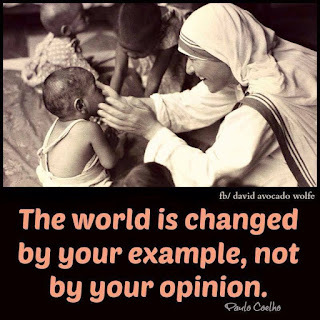 This came to my Facebook page this week and I have to agree.  Thanks to my friend who sent it my way, and the person who designed it (as quoted in the inscription).  The kids here have been reading 'Teresa of Calcatta' over the last couple of weeks and we have watched a few YouTube clips that feature her.  She is one extremely interesting woman.  I grew up in a world where she was a prominent on TV.   I can remember watching the news and seeing Princess Diana with her.  But, I never know what she did.  Now I have looked deeper into her world through brilliant writings and clips, I am left open mouthed with surprise and respect for such an amazing woman.

Serving the Poorest of the Poor Agnes and her family lived in Macedonia in eastern Europe. Agnes eagerly read letters by missionaries from faraway places. She especially enjoyed the letters from Calcutta, India. Eventually Agnes arrived in Calcutta where she taught young, well-to-do girls. They knew her as Sister Teresa. Unsatisfied, Teresa searched for her calling in life. One day she decided to work with "the poorest of the poor." She conducted her first class in a public park. Only five street children attended. Despite the hardships, she stayed with the work. She knew that God had sent her to care for these people who had no one else to love them Teresa dressed in a simple white sari with a blue border. A safety pin held a cross at her left shoulder. She became a familiar sight in the slum streets of Calcutta. Teresa not only helped the poor, she became one of them. She told the girls she trained, "We will pattern our lives after their poverty. We are poor by choice. We want to be poor like Christ, who, being rich, chose to be born and live and work among the poor."

This was available from: Book Depository and Fishpond

This is one of the many clips we watched
There are quite a few available on YouTube.com

I hope these will in inspire all of us to look at what we do for others, today